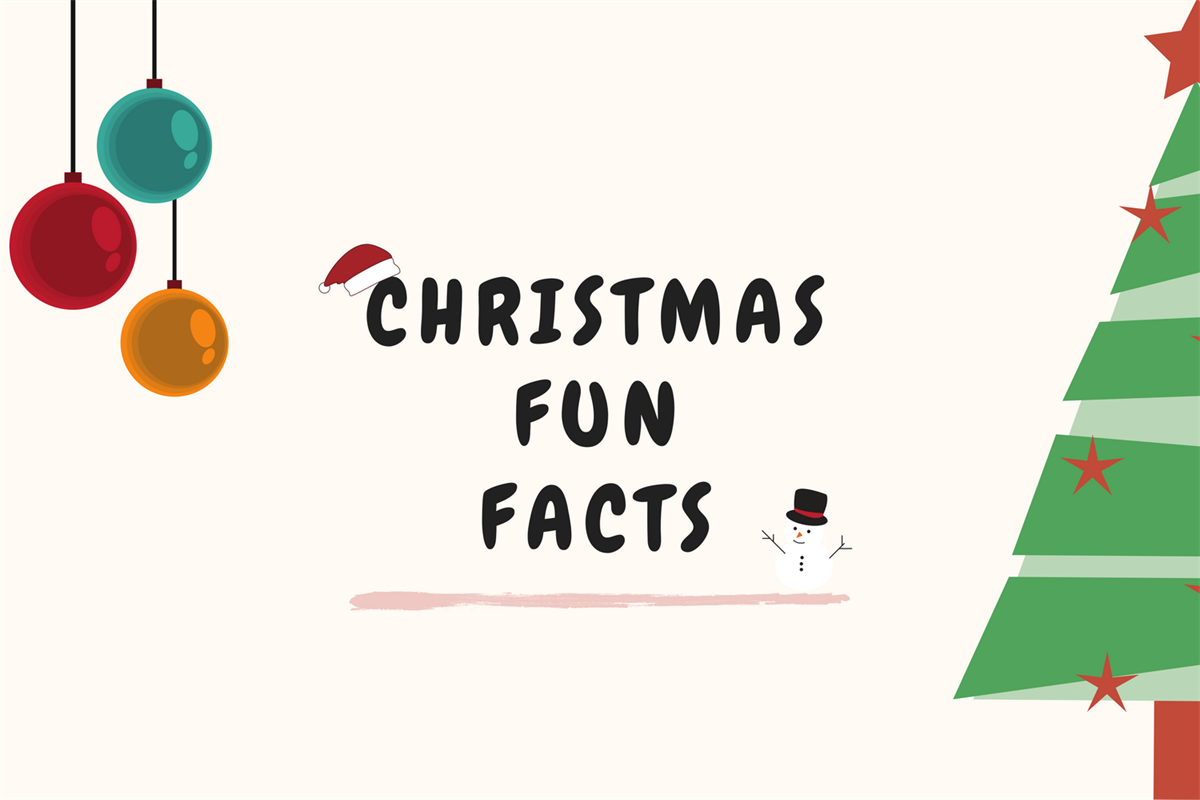 Thoughts on Thursday - Quiz your family on these fun Christmas facts

While sitting around the dinner table this year at Christmas, instead of fighting over politics, quiz your family on these random fun facts about Christmas.

1. The image of Santa Claus flying his sleigh began in 1819 and was created by Washington Irving, the same author who dreamt up the Headless Horseman.

2. The Montgomery Ward department store created Rudolph the Reindeer as a marketing gimmick to encourage children to buy their Christmas coloring books.

3. The original Rudolph did not have a red nose. In that day and age, red noses were seen as an indicator of chronic alcoholism and Montgomery Ward didn’t want him to look like a drunkard. To complete the original picture, he was almost named Reginald or Rollo.

4. Clement Moore’s poem introduced eight more reindeer for Santa’s sleigh and their names were Dasher, Dancer, Prancer, Vixen, Comet, Cupid, Duner and Blixem (for the German words for thunder and lightning). These later evolved into Donner and Blitzen.

5. Most of these names are male-sounding names. Male reindeer shed their antlers in winter, however, so the reindeer pulling Santa’s sleigh are more than likely female or castrated.

6. Some leave food out for Santa Claus’ reindeer as Norse children did, leaving hay and treats for Odin’s eight-legged horse Sleipnir hoping they would stop by during their hunting adventures. Dutch children adopted this same tradition, leaving food in their wooden shoes for St. Nicholas’ horse.

7. Dutch children also left out food and drink for St. Nicholas himself to honor him on his feast day. Today we leave milk and cookies out for Santa, continuing this very old tradition.

8. America’s first batch of eggnog was made in the Jamestown settlement in 1607. Its name comes from the word “grog”, meaning any drink made with rum. Non-alcoholic eggnog is popular as well.

9. Want to know a useful way to recycle your Christmas tree? Some zoos take donated Christmas trees and use them as food for the animals.

10. Between the 16th and 19th centuries global temperatures were significantly lower than normal in what was known as a “little ice age”. Charles Dickens grew up during this period and experienced snow for his first eight Christmases. This “White Christmas” experience influenced his writing and began a tradition of expectation for the holidays.

11. The Christmas tree in Trafalgar Square is donated to the people of London every year by the people of Oslo, Norway in thanks for their assistance during World War II.

12. Since 1918 the city of Boston has received a giant Christmas tree as a gift from the Canadian province of Nova Scotia. Boston lent considerable support to the city of Halifax during their 1917 explosion and subsequent fire disaster.

13. In 1914 during World War I there was a now famous Christmas truce in the trenches between the British and the Germans. They exchanged gifts across a neutral no man’s land, played football together, and decorated their shelters. (Read more about it in the book “Silent Night: The Story of the World War I Christmas Truce” by Stanley Weintraub.)

14. In 2010 during the Christmas season, the Colombian government decorated jungle trees with lights. The trees lit up when the guerrillas (terrorists) walked by and banners appeared asking them to surrender their arms. The campaign convinced 331 guerillas to re-enter society and also won an award for strategic marketing excellence.

15. Bicycle, the U.S. playing card company, manufactured cards to give all the POWS in Germany during World War II as Christmas presents. These cards, when soaked in water, revealed an escape route for POWs. The Nazis never knew.

16. The Christmas wreath was originally hung as a symbol of Jesus. The holly represents his crown of thorns and the red berries the blood he shed.

17. The three traditional colors of most Christmas decorations are red, green and gold. Red symbolizes the blood of Christ, green symbolized life and rebirth, and gold represents light, royalty and wealth.

18. In Poland spiders are considered to be symbols of prosperity and goodness at Christmas. In fact, spiders and spider webs are often used as Christmas tree decorations. According to legend, a spider wove baby Jesus a blanket to keep him warm.

19. Tinsel was invented in 1610 in Germany and was once made of real silver.

20. The tradition of hanging stockings comes from a Dutch legend. A poor man had three daughters for whom he could not afford to provide a dowry. St. Nicholas dropped a bag of gold down his chimney and gold coins fell out and into the stockings drying by the fireplace. The daughters now had dowries and could be married, avoiding a life on the streets.

21. The old English custom of wassailing was to toast to someone’s long life at Christmastide and was the forerunner for the tradition of Christmas caroling. In the 13th century St. Francis of Assisi began the custom of singing carols in church.

22. “White Christmas”, Rudolph the Red-Nosed Reindeer”, “Winter Wonderland”, “The Christmas Song” and “I’ll Be Home for Christmas” plus the melody for “O Holy Night” were all written or co-written by Jews.

23. Brenda Lee recorded “Rockin’ Around the Christmas Tree” when she was only 13 years old.

25. Paul McCartney’s Christmas song is widely regarded as the worst of all the songs he ever recorded yet he earns $400,000 a year off of it.

26. If you gave all the gifts listed in the Twelve Days of Christmas, it would equal 364 gifts.

27. In Dublin in 1742 the Christmas oratorio, “The Messiah”, by George Frederick Handle was first performed.

28. NORAD’s “Santa Tracker” was born from a misprint in the newspaper. A 1955 Sears ad was supposed to print the number of a store where children could call and tell Santa what they wanted for Christmas. The number printed was to the hotline of the Director of Operations for the U.S. Continental Air Defense. Colonel Shoup ordered his staff to give the children updates on the flight coordinates of Santa.

29. A tradition began and continues until this day. NORAD (North American Aerospace Defense Command) continues to provide flight updates on local news, the Internet, and even a special iPhone application every Christmas.

31. You would have to use your artificial tree for more than 20 years for it to be ‘greener’ than buying a fresh-cut tree annually.

32. Nova Scotia is the world’s leading exporter of Christmas trees.

33. Since Denny’s restaurants in the U.S. were originally designed to be perpetually open their buildings were built without locks. This became a problem when they decided in 988 to close on Christmas Day for the first time.

34. Almost 28 sets of LEGO are sold every second during the Christmas season.

35. The Christkindlesmarkt in Nuremberg, Germany was first held in 1570 and is one of Europe’s oldest Christmas markets. It is also the largest in Europe. Folks from all over the world visit it annually.

36. Christmas is celebrated on the 25th of December, which marks the birth of Jesus Christ (P.B.U.H). However, the exact date and month of Jesus’ birth are unknown.

37. And interestingly, even though the majority of the population believes that Jesus (P.B.U.H) was born on this day, they spend more time visiting shopping malls than studying the life of the messenger.

38. ‘Jingle Bells’ – the popular Christmas song was composed by James Pierpont in Massachusetts, America. It was, however, written for thanksgiving and not Christmas.

39. ‘Jingle Bells’ – was the first song sung by astronauts Tom Stafford and Wally Schirra in space, on December 16, 1965.

40. Christmas might be a public holiday; however, it is not a biblical holy day. The Bible does not say anywhere to keep Christmas as a holy day.

41. Our modern day Santa Claus has to travel at more than the speed of light to deliver gifts to all the kids in the world and he would have 31 hours (considering all the times zones) on the Christmas day to get his favorite job done.

42. Coca-Cola was the first company that used Santa Claus during the winter season for promotion.

43. There is also a website – Christmas.com. However, the site is a commercial space on the web. You can shop a variety of things and products related with this giant festival celebrated in various parts of the world.

44. A law in Britain to this day forbids you from not visiting church on Christmas day. And you cannot visit the church on a vehicle. However, this law is just sitting on a piece of paper and is not followed actually.

45. The Statue of Liberty was gifted to the US by the French on Christmas day in 1886. It weighs 225 tons and thus you could consider it as the biggest Christmas gift in the world.

46. Did you know that the first Christmas was celebrated on December 25, AD 336 in Rome?

47. Other names of Christmas from the old times include – ‘Midwinter’, ‘Nativity’ and ‘Yule’.

48. More than 3 billion Christmas cards are sent in the U.S. alone, every year. The business of ‘Christmas cards’ is huge, if you are looking for one.

49. The other name of ‘Christmas Tree’ is Yule-tree.

50. Did you know that Christmas trees are grown in all 50 states including Hawaii and Alaska?

52. Christmas tree decoration is believed to have originated in the 16th century in Germany.

54. Alabama became the first US state to declare Christmas as a legal holiday in 1836 and the last was Oklahoma in 1907.

55. Christmas trees were first decorated with fruits (mainly apples), and then later on people started using candles, and then electric lights (1895) to decorate these trees.