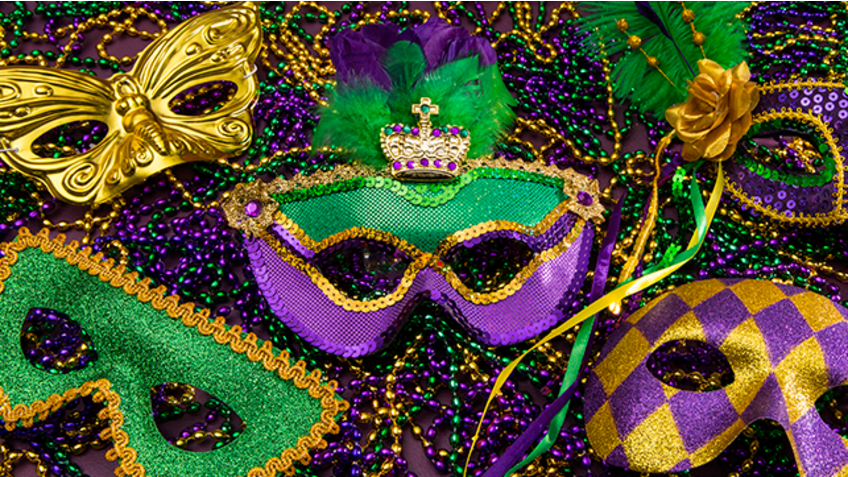 Fun Facts on Friday... It's Mardi Gras season y'all!

Growing up in Atlanta, I did not know or care much about Mardi Gras. I knew it took place in New Orleans and people did parades on the streets and that was the extent of my knowledge. However, since we moved to Gulf Shores, Mardi Gras has quickly become one of my favorite seasons down here - from the floats, to the marching bands, to the moon pies and the balls - everything about Mardi Gras is exhilarating and exciting! If you are not from around here and have never experienced a Mardi Gras parade, I highly recommend you adding it to your bucket list! And since Mardi Gras is right around the corner, what better way to kick off the season than Fun Facts on Friday all about Mardi Gras in Mobile. Grab yourself a moon pie and enjoy...

"We usually associate Mardi Gras with New Orleans and all the parade revelry in the French Quarter and Uptown. But the oldest carnival celebration as we know it—parades, masked balls, kings and queens, and mystic societies—happened in Mobile, Alabama.

Like Louisiana, the Gulf Coast of Mississippi and Alabama got a heavy dose of French culture from early explorers. All along the coast, you'll see streets and towns named after French brothers Pierre Le Moyne Sieur d'Iberville and Jean-Baptiste Le Moyne de Bienville, sent to America to locate the mouth of the Mississippi and guard French territory against interference from the Brits and the Spanish. The brothers landed at what is now Plaquemines Parish, Louisiana, in 1699 the day before Mardi Gras—a longstanding celebration in France—and Pierre named the spot Point du Mardi Gras. Some say this was the very first observance of Mardi Gras in America, although it would have been a small crew (no krewes) of Frenchmen raising a glass to Fat Tuesday.

Mobile Mardi Gras was first celebrated in 1703. But things really got crankin' in 1831, when a tipsy cotton broker tied some cowbells to a rake that had just hit him over the head . . .

Here are some fun facts about Mardi Gras in Mobile:

Stumbling through the dark streets of Mobile after having a festive New Year's Eve dinner with a ship's captain anchored there, a cotton broker named Michael Krafft sat down in the doorway of a local hardware store (reasons unknown but we could venture a guess). He accidentally knocked down a rake and a string of cowbells. In his fun-loving state, he tied the bells to the rake and attracted a procession as he traveled through town, jangling the bells. Asked what society his group represented, Krafft thought it over and replied, "the Cowbellion de Rakin Society." Locals began anticipating the Cowbellions, who made annual appearances on New Year's Eve—for years, the date of Mobile's Mardi Gras celebration.

The Sunday before Fat Tuesday is Joe Cain Day in Mobile.

After the Civil War, Mobile local Joe Cain, who was fed up with the misery of the war and Reconstruction, dressed himself as a Native American, called himself Chief Slackabamarinico, and led a parade through Mobile, still occupied by Union forces. He not only revived Mobile's Mardi Gras celebration, but got it moved from New Year's Eve to Fat Tuesday.

They throw Moon Pies because Cracker Jacks can hurt you.

Mystic societies once threw boxes of Cracker Jacks to revelers, but a box sailing through the air from a parade float can injure a person. Moon Pies are yummy, Southern, and relatively safe as snack foods go.

These coins bearing the emblem of a mystic society are sought after and collectible, so if you see one sailing your way, go for it.